The Strait of Hormuz is 35 to 60 miles (55 to 95 kilometers) wide and can be found between Iran and Oman. The Straight happens to be the sole sea passage that connects the Persian Gulf to the open ocean. According to some estimates, as much as 35% of the world’s oil supply passes through the Strait.

The very small region poses a tremendous risk to global security as some of the bordering countries, namely Iran, have little regard for peace and stability.

International law couldn’t be any clearer: all ships and aircraft enjoy the right of transit passage. But if countries like Iran show little regard for international law, the global community needs to take action. To the surprise of some, the UAE along with France and European allies, not the United States, are stepping up to secure the world’s access to the most valuable commodity.

But why is this the case and how did it come to this?

The Strait Of Hormuz Needs Protection

The need to secure the region escalated when Iran — part of what The Economist dubbed the “Axis of Diesel,” warned the world it would seal the Strait if the United States or Israel launched an attack.

Vice Adm. Lowell Jacoby, director of the U.S. Defense Intelligence Agency, confirmed three years prior that Iran has the necessary resources to, at the very least, “briefly” close the Strait. Naturally, the U.S. made it clear any such attempt would be seen as an act of war as it would starve the world of oil.

France and the UAE Take The Lead

In a dramatic development in diplomatic ties in the region, in late November of 2019, France struck an agreement with the United Arab Emirates to lead a coalition of European Union members and secure the Strait of Hormuz. The two countries have a history of cooperation, dating back to Shaikh Zayed’s first official visit to France in 1974 with the purpose of forging new friends and allies.

Though French defense minister Parly and UAE officials have agreed to station the maritime EU-led coalition in the French naval base in Abu Dhabi, they have yet to specify which European countries will be in the coalition.

French Minister of the Armed Forces Florence Parly said at that time that European armed forces will offer safety and security to shipping vessels in a “disputed area where there have already been a number of serious incidents.”

French media reports revealed a month after the coalition was formed to expand to military equipment that French defense contractors will upgrade Emirati Mirage 2000-9 fighters in a deal valued at around $550 million.

German politician and chairman of the Committee on Foreign Affairs argued in a policy paper that Europe needs to secure the region because it is “in our neighborhood.”

The U.S. 5th Fleet is tasked in part with patrolling the Strait of Hormuz although the Fleet’s total area of operations encompasses around 2.5 million square miles of water area, including the Persian Gulf and Mideast waters.

While the Fleet has been in the region for decades its role is shifting as the U.S. redefines its purpose in the region under the leadership of President Trump and his “America First” vision.

President Trump said in a June 24 Tweet that American forces are protecting Middle East shipping lanes for “zero compensation.” China gets 91% of its oil from the Strait of Hormuz while Japan isn’t too far behind at 62%.

“We don’t even need to be there in that the U.S. has just become (by far) the largest producer of Energy anywhere in the world!,” the Tweet continued. 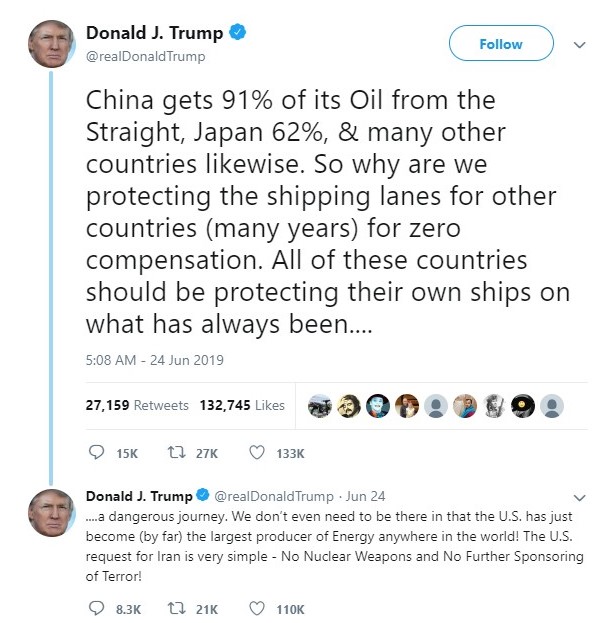 Trump’s global counterparts naturally disagree. Japan’s chief cabinet secretary, Yoshihide Suga, responded to Trump’s comments and said protecting the Strait of Hormuz is “a matter of life and death for our country in terms of energy security.”

Even if that is the case, Japan should pay its fair share to protect its own interests, the Trump administration is quick to argue and so, the Japanese government has now contributed troops to the Strait of Hormuz.

Disagreements between the U.S. and E.U. are intensifying and, if left unresolved could even boil over into a trade war. At the heart of the political rift are the drastic difference in policies towards Iran and the nuclear agreement.

Europe is obsessed with avoiding conflict with Iran and still believes peace is possible despite evidence to the contrary. After all, the British-flagged oil tanker was held by Iran for two months before the ship and crew were released.

This is the same regime who reopened the British embassy in Iran without bothering to clean up the “Death to England” message engraved above a picture of the Queen.

If Iran senses weakness they could become more aggressive in the open waters.

Iran may feel it can get away with pushing around British and French forces. But with the newly formed alliance between the UAE and France, it’s becoming increasingly clear that any sign of bullying from Iran will be met with the full force of France’s and the UAEs coalition which will cause Iran devastating damage on the international stage and keep sanctions firmly in place.

Why Some Arabian Jews Supported Prophet Muhammad And Others Didn’t

The Moroccan Times is a non-profit news Magazine that aims to objectively report Moroccan and international news in English.
Contact us: moroccantimes@gmail.com

Why Some Arabian Jews Supported Prophet Muhammad And Others Didn’t